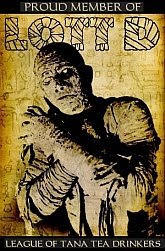 Meet the Horror Bloggers: Gospel of the Living Dead 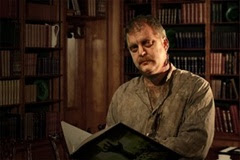 Many fans of horror, amateur and professional alike, have devoted themselves to blogging about the thrills, chills, and no-frills side of the genre as seen in cinema and print. In this ongoing series that highlights the writers behind the blogs, we meet the unique personalities and talents that make the online horror scene so engaging. Up close and personal.

In this installment, author and horror blogger Kim Paffenroth of Gospel of the Living Dead talks about zombies and religion, and how the two meet to provide enlightening revelation.

I think, like many people, my first interest in horror goes back to adolescence, when I was fascinated with some horror movies (especially Romero's zombies), and with some written expressions of horror (especially Lovecraft). I thought gross, bleeding, oozing things were cool. I think it's pretty typical at that age. Then my mother died a slow, lingering death from cancer, and that made my interest a little less "cool" and a lot more brooding and sullen. I put some of my feelings into bad fiction writing and bad poetry at that age, I suppose as a kind of catharsis or self-therapy. It worked, for what it was, I guess.

But when I went off to college, that phase just stopped. It didn't trail off, it just stopped the day I got off the bus in front of Campbell Hall. Something about the place (St John's College, Annapolis, MD) just awed me with the ideas of dead guys who knew so much more than I did; I should stop and read every word I could and not interrupt with my sophomoric attempts to put angst or pain or rebellion into words. (I know, I wouldn't have articulated the feeling that way at the time, but in hindsight, that's what I was feeling at all the ivy-covered walls and dusty books and rather arcane, 19th century-looking lab apparatuses.)

So for years, all I did was read. I didn’t write a thing other than assignments for class. I read philosophy, literature, history, political theory, science, music theory, and, especially, theology - either in terms of Scripture, or theologians, or literature with Christian themes. And I saw that theology - broadly construed under all the types of writing I just listed - resonated more with me. I really
do think all good writing gets at some of the same questions, but I also think people phrase it in different languages, if you will - whether it's art or music or poetry or philosophy or natural science or theology, our minds gravitate toward different phrasings of the ultimate questions.

And within Christian theology, it was pretty clear early on that it wasn't the nice stuff that attracted me - the logic of Aquinas, or the Light and Love of the Gospel of John, or the triumph and hope of Exodus. No, it was always the stuff that was such a downer - the terrifying side of God, the whirlwind, the abyss, the lonely quest for Him. No, I'd read over and over the same dark, God-centered books, rather than turn to the cheery stuff: the tortures of Job, the numbing ennui of Ecclesiastes or Pascal, the empty tomb of Mark, the self-loathing of Augustine, the horrors of Dante, the seductive majesty of Milton's Satan, the terrible dark corners of the human soul in Dostoevsky and Melville and Flannery O'Connor, the cries of despair in Wiesel or Beckett.

I continued to study those things after college, and I began my career as a college professor, trying to teach such texts, and write about them. And I didn't really think about horror as a genre (though I think it's clear I sought out the horrifying parts of Scripture and theology). I'd see some of the "standard" horror movies as they came out - The Omen, a couple of the Halloween or Nightmare on Elm Street sequels, Blair Witch, Silence of the Lambs - but I hardly kept up on the genre. And, in hindsight, my favorite monster, the zombie, wasn't as visible in those years (1985-2000). He was laying low, too. But then I saw the ads for the Dawn of the Dead remake (2004) and something clicked. I saw the movie, then I watched the DVD, over and over, every night for weeks after everyone else went to bed. And how similar Romero's (and then Snyder's, and others) vision was to Dante became completely clear, and I wrote about it. I'd tied horror back to the classics of Western theology, or I'd shown how the two were expressing some of the same ideas, some of the same analysis of what is sick about human beings. That analysis culminated in my book Gospel of the Living Dead: George Romero's Visions of Hell on Earth (Baylor, 2006), which won the 2006 Bram Stoker Award.

While I was working on that, the bug of fiction writing came back too, but now to someone with (hopefully) a lot more experience and maturity, a better "vocabulary" for talking about these things. I got the crazy idea that I might be able to write some of my own zombie fiction, rather than just analyze other people's, and I'd be able to make my zombies do and symbolize whatever I wanted them to.

I've had some success with that, and it's allowed me to present my ideas to a very different and diverse audience, which is what any writer hopes for, I think, whatever they're writing.

Gospel of the Living Dead: Kim Paffenroth's Page on His Zombie-related Fiction and Non-fiction